Allora and Calzadilla’s collaborations bear a distinctive hallmark. Bizarre humour, bordering on the absurd, runs through their work, yet there is a strong social and political foundation underlying this, as areas of political tension in the public realm are magnified through their wide-ranging body of work. They are meticulous researchers that identify the stress and eventual ruptures in societal systems, nationhood, environmentalism, states of war, and resistance, through a variety of media including performance, sculpture, sound, video, and photography.

This artistic duo, who have been collaborating since 1995, make hybrid works, often a unique mix of sculpture, photography, performance, sound and video, which are experiments that challenge ideas
of authorship, nationality, borders, and democracy with respect to today’s increasingly global and consumerist society. Through their work, Allora and Calzadilla explore the physical and conceptual act of mark-making and its ephemeral capacity as metaphorically historical, cultural, and political.

The couple’s artistic career has led them to exhibit in the world’s most important museums. Solo exhibitions include Indianapolis Museum of Art (2012), Haus der Kunst, Munich (2008), Stedelijk Museum, Amsterdam (2008), Kunsthalle Zurich (2007) and Walker Art Center, Minneapolis (2004). Among numerous group exhibitions, they participated in documenta 13, Kassel, Germany (2012); the 29th São Paulo Biennial (2010) and Performance 9 at the Museum of Modern Art, New York (2011). They also represented the USA in the 54th Venice Biennale (2011). 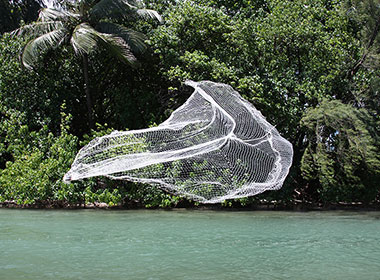