b. 1935 in Sancheong, Korea
Lives and works in Seoul, South Korea

Ha Chong-Hyun is an important Korean artist whose unique method has set him apart
from his ‘Dansaekhwa’ contemporaries. He uses coarsely woven hemp cloth - the oldest
fabric known in Korea - and pushes oil paint through the loose weaves of the hemp from
the back, then reworks the pigments using spatulas. Through his intuitive sense of aesthetic
understanding, Ha Chong-Hyun focuses on the primary concerns of painting, such as the surface,
gesture, space, and light.
Through direct modulation and contrasts, Ha Chong-Hyun’s reduction of palette to black, white,
and earth tones, inspire a fresh interpretation of blank writing based on the organic geometry
found in ‘Hangul’ - the phonetic Korean alphabet invented during the Joseon Dynasty in the 15th
century. Likewise, Qi, or energy, plays a fundamental role in these works as the artist engages in
a kind of ancient mystical writing, inscribing a set of marks that hold an emotional and intellectual
counterpart.

Ha Chong-Hyun was honoured with a solo exhibition at the National Museum of Contemporary Art
(Gwacheon, Korea, 2012). He has also exhibited his works at the Kaohsiung Museum of Fine Arts (Kaohsiung,
Taiwan, 2011), the Seoul Olympic Museum of Art (Seoul, Korea, 2010), the Sunshine International Art Museum
(Beijing, China, 2009). In addition, he has represented South Korea in major international exhibitions such
as Paris Biennale in 1961, Sâo Paolo Art Biennale in 1967 and 1977, Venice Biennale in 1995 and
Prague Biennale in 2009, as well as participating in the 5th Busan Biennale (Busan, Korea, 2008).
Ha Chong-Hyun’s work is represented in the public collections of the Seoul City Art Museum (Seoul, Korea),
Hoam Art Museum (Yongin, Korea), Hong-Ik University Museum (Seoul, Korea), Tokyo Metropolitan Art Museum
(Tokyo, Japan), and the Fukoka Art Museum (Fukoka, Japan), to name a few. 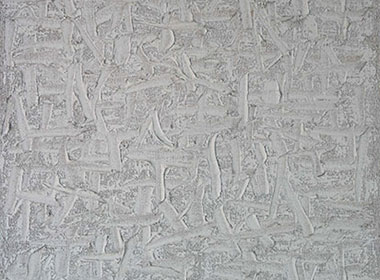