Gregory Crewdson works within a photographic tradition that combines
the documentary style of William Eggleston and Walker Evans with
the dream-like vision of filmmakers such as Stephen Spielberg and
David Lynch. Crewdson’s method is equally filmic, building elaborate
sets to take pictures of extraordinary detail and narrative portent.
Recent series include everyday scenes with charged, surreal moods
that hint at the longings and malaise of suburban America.
These pictures are like incomplete sentences, with little reference
to prior events or what may follow. The artist has referred the 'limitations¨
of a photograph in terms of narrative capacity to have an image that is
frozen in time, (where) there's no before or after' and has turned that
restriction into a unique strength.

Crewdson’s career has spanned three decades. His work has been exhibited
widely in the United States and Europe and is included in many public collections,
including The Museum of Modern Art, The Metropolitan Museum of Art,
The Whitney Museum of American Art, The Brooklyn Museum,
The Los Angeles County Museum, Fotomuseum Winterthur, Switzerland,
the V&A Museum, London, and The San Francisco Museum of Art.
A retrospective of his work was held at the Kunstverein Hannover, Germany,
and travelled to the Fotomuseum Winterthur, Switzerland and the
Hasselblad Center, Sweden. A travelling exhibition of his work opened at the
Kulturhuset Museum, Stockholm, and travelled to Sorte Diamant, Copenhagen and Berlin. 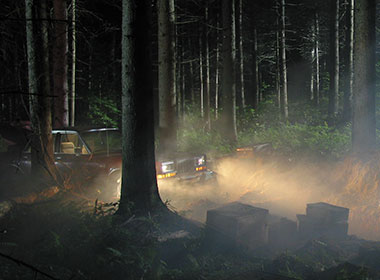