Drawing on his formal training as an architect, Dávila creates sculptural installations
and photographic works that simultaneously emulate, critique, and pay homage
to 20th century avant-garde art and architecture. Referencing artists and architects
from Luis Barragán and Mathias Goeritz to Donald Judd and Dan Flavin, Dávila’s work
investigates how the modernist movement has been translated, appropriated, and reinvented.
The dyptych Untitled directly refers to Dan Flavin’s light installations. Using large scale
reproductions of Flavin’s works, Dávila cuts out the sources of light that, in Flavin’s pieces,
caused shimmering effects. Framed between two glasses, leaving a distance between the
back of the frame and the  collage itself, the reproduction casts a shadow that creates a spatial effect. 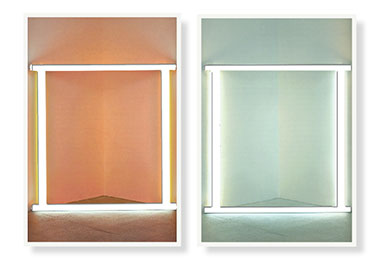