The tempestuous works of Francisco de Goya distinguish him as the most
important Spanish painter of his time. Among his contemporaries, he was
best known for his lighthearted tapestry cartoons of leisure activities, subtle
satirical etchings of the bourgeoisie, and penetratingly psychological portraits
of the aristocracy. Having survived an unknown illness that left him deaf and
witnessed the atrocities committed during Napoleon’s occupation, which are
hauntingly portrayed in the mass execution of Spanish civilians in The Third of
May 1808, Goya went on to create some of his most somber, chilling images
with his late “Black Paintings,” which were painted directly onto the walls of his home.
Now recognized as a harbinger of modern art, Goya influenced numerous artists,
including Pablo Picasso in the creation of his masterpiece Guernica (1937). 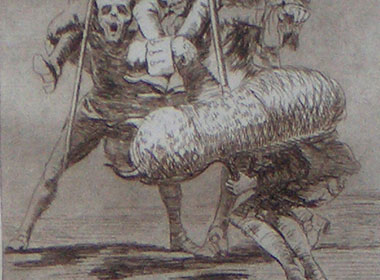