For fifty years, Dan Graham has traced the symbiosis between architectural
environments and their inhabitants. With a practice that encompasses curating,
writing, performance, installation, video, photography and architecture,
Graham’s critical engagement manifests most alluringly in the glass and
mirrored pavilions, which he has designed since the late 1970s and which
have been realised in sites all over the world. These instruments of reflection
– visual and cognitive – highlight the voyeuristic elements of design in the
built world. Poised between sculpture and architecture, they glean sparseness
from 1960s Minimalism, redolent of Graham’s emergence in New York in the
1960s alongside Sol Le Witt, Donald Judd and Robert Smithson. Graham
himself has described his work and its various manifestations as
‘geometric forms inhabited and activated by the presence of the viewer,
[producing] a sense of uneasiness and psychological alienation through a
constant play between feelings of inclusion and exclusion.’
The pavilions draw attention to buildings as instruments of expression,
psychological strongholds, markers of social change and prisms through
which we view others and ourselves.

Graham has had retrospective exhibitions at the Museum of Contemporary Art, Los Angeles,
Castello di Rivoli Museo d’Arte Contemporanea, Turin, Museu Serralves, Porto,
Museum of Modern Art, Oxford, Van Abbemuseum, Eindhoven, Kunsthalle Berne,
Walker Art Center, Minneapolis and the Renaissance Society, University of Chicago.
He has participated in Documenta 5, 6, 7, 9 and 10 (1972, 1977, 1982, 1992, 1997).
Among numerous awards he received the Coutts Contemporary Art Foundation Award, Zurich,
the French Vermeil Medal, Paris, and was honoured by the American Academy of Arts and Letters, New York.
His work is represented in the collections of numerous major institutions in the United States
and Europe, including Moderna Museet, Stockholm; Centre Pompidou, Paris; and Tate Gallery, London. 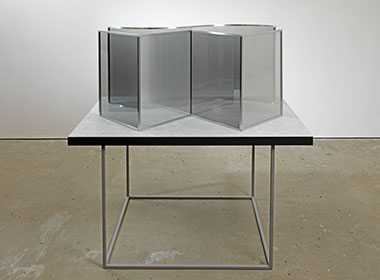