German, b. 1963, Dusseldorf, Germany, based in Dusseldorf & New York

Modernist overhang slab roof houses, brick villas in idyllic surroundings
and suburban bungalows with neat garden paths and flowerbeds are the
subject of Kürten’s recent paintings.  Almost all depict isolated buildings
that are surrounded by a wall, hedge or lush vegetation and draw the
viewer's attention to a singular piece of invented architecture.
These structures often closely resemble iconic mid-century modern dwellings,
but have been rebuilt by Kürten’s conflation of imagery. Their sense of familiarity
is strong and viewers often feel they have visited these non-existent homes.
The surfaces of Kürten’s paintings are composed of innumerable brushstrokes
forming patterns that evoke sky, water and foliage. The density of the patterning
can elicit a sense of horror, destabilizing these beautiful illusions. 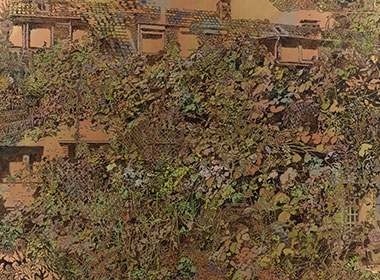