German, b. 1966, Esslingen am Neckar, Germany, based in Frankfurt, Germany

Tobias Rehberger creates objects, sculptures and environments as diverse as they are prolific.
Drawing on a repertoire of quotidian objects appropriated from everyday mass-culture,
Rehberger translates, alters and expands ordinary situations and objects with which we
are familiar. At once utilitarian, ambient and perceptually powerful, Rehberger’s objects
and environments mimic the glossy perfection of the manufactured yet idiosyncrasies in
terms of their colour, size, function and location demand new rules of engagement on
behalf of the beholder.

In a mesmerising installation at the Venice Biennale of 2003, Rehberger created a canopy
of glass lamps activated by triggers located in seven different locations around the globe
including a pumpkin field in the Walachi region in Romania, and a derelict Burger King
in Kyoto. Emerging from ordinary conditions that have been radically altered, Rehberger’s
proposals are interdependent upon the viewer. As such they exist as potent instruments for
examining the relationship between objects and situations, and our shifting sensibilities
as individual subjects. 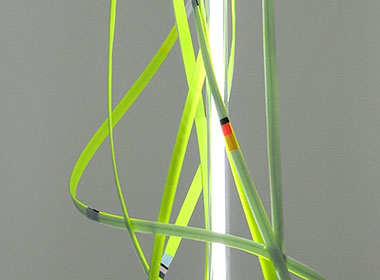