An artist trained as an architect, Tomás Saraceno deploys insights from engineering,
physics, chemistry, aeronautics and materials science in his work. Inspired by the
tradition of twentieth-century utopian architecture, he creates inflatabale and airborne
biospheres, which come from a desire to create low-impact aerial structures that are
inhabitable and energy self-sufficient.

Saraceno, who describes himself as someone who "lives in and beyond the planet Earth",
takes inspiration primarily from the idea of breaking down geographical, physical, behavioural
and social barriers. But also from the idea of life that is sustainable for man and planet,
from the encounter and interaction between different disciplines and forms of understanding.

Among his many exhibitions since the late 1990s, Saraceno’s important solo presentations
include Cosmic Jive, Tomas Saraceno: The Spider Sessions at the Villa Croce in Genoa, Italy,
Tomás Saraceno at HfG Karlsruhe in Karlsruhe, Germany,
In orbit at Kunstsammlung Nordrhein-Westfalen K21 in Düsseldorf, On Space time foam at Hangar Bicocca in Milan,
Tomas Saraceno on the Roof: Cloud City, a site-specific installation commissioned for
The Metropolitan Museum of Art in New York, Cloud Specific at the Kemper Museum of Contemporary Art
in St. Louis, Cloud Cities at Hamburger Bahnhof, Berlin,
14 billion, which opened at Bonniers Konsthall in Stockholm in 2010 and traveled to the
BALTIC Centre for Contemporary Art in Gateshead, UK, and Lighter than Air, a travelling exhibition
at the Walker Arts Center in Minneapolis and Blaffer Art Museum at the University of Houston.
Saraceno also presented a major installation at the 53rd Venice Bienale in 2009 as part of the group exhibition,
Fari Mondi//Making Worlds, curated by Daniel Birnbaum.

His work is presently represented in the collections of the Museum of Modern Art in New York,
Miami Art Museum, Musée d’Art Moderne Grand-Duc Jean in Luxembourg,
Museum für Moderne Kunst in Frankfurt, San Francisco Museum of Modern Art,
and the Walker Art Center in Minneapolis, among others. 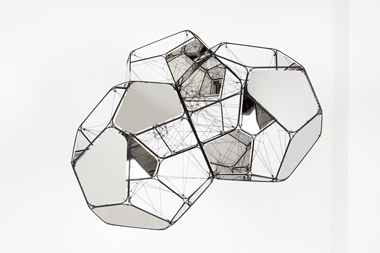