b. 1954, Oldenburg, Germany
Lives and works in Germany

Thomas Schütte, one of the most important artists of his generation,
studied art at the KunstakademieDüsseldorf alongside Katharina Fritsch
under GerhardRichter, DanielBuren and BenjaminBuchloh. His installations,
sculptures, prints, drawings and watercolours take different and often contradictory forms.
Schütte’s art looks utilitarian offering sustenance, shelter and companionship yet delivers
false promises and alien worlds. He uses a wide spectrum of colours and a range of materials
to revise the basic constituents – natural, cultural, political – of everyday life whilst exploring
fundamental question about the artist and society.

In the early eighties he started to work with architectural models, small mock-ups made out
of rudimentary materials which he used to reflect a metaphor of the rules and regulations
that govern our life, at the same time suggesting both ideal and quotidian living environments,
while commenting on the role of the artist in society and on the art institution itself.
Some of these models became feasible buildings.

Schütte has exhibited extensively throughout the United States and Europe. Recent solo exhibitions
of his work have been held in institutions such as the Museo de Arte Renia Sofia in 2010,
the Haus der kunst in Munich in 2009 and the Kunstmuseum Winterthur in Switzerland in 2003.
He has also participated in exhibitions in major institutions such as the Los Angeles County Museum of Art,
the Stedelijk Museum in Amsterdam and the Fondation Beyeler in Basel. Schütte participated in Documenta,
Kassel three times, and in the 2005 Venice Biennale, where he was awarded the Golden Lion. 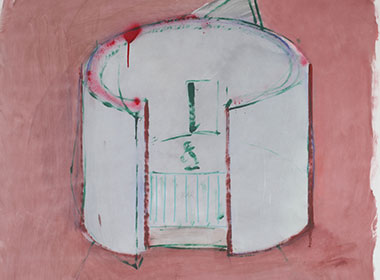